Now available as an audiobook with Whispersync
bol_audible_sample.m4a
A woman plunges into consciousness in the midst of what seems like someone else’s life, sending her on a quest to discover who she is and to craft an identity that makes sense within her current circumstances. As she digs into the mystery of her life, she uncovers a top-secret government organization plotting world domination and a clandestine vigilante organization dedicated to destroying it and is caught between these warring factions. Nobody in her new world is exactly who they appear to be, including herself. Identity, she learns, is complicated and inseparable from the body in which it resides.

Brink of Life explores the Ambrosia Conversion from a woman’s perspective, filled with new complications to the ramifications of eternal life.

Even when the action lurches between major event sequences, her afterlife advances with all the gusto of a spy thriller.
Foreword Clarion Reviews

Brink of Life is the second in a fascinating science fiction trilogy about a futuristic society where minds can be swapped to different bodies...As in the first book, intriguing issues of identity, immortality, morality, and ecology are considered. Plot twists and shifting identities keep things interesting as readers are constantly kept off balance.
BlueInk Reviews

A woman wakes up in a body not her own in this novel from Moskovitz (A Stand-in for Dying, 2019), the second in his Brink of Life Trilogy.

Moskovitz tells the story with urgent concision, his prose brisk and clear…This makes the story a quicker and more satisfying read than even the previous volume in the series….

With his thoughtful exploration of the ethical consequences of technology and class division, Moskovitz offers another sci-fi morality tale in the tradition of Philip K. Dick and Black Mirror.

This story is another page-turner that leads the reader one step closer to the final conclusion in this advanced society between good and evil and understanding the fine line between the two.  Star Rating 5/5
San Francisco Book Review
Brink of Life is a beautiful meld of science fiction and paranormal, a story with sophisticated characters and a strong plot. The narrative is done in an exciting and confident tone, with crisp and beautiful prose punctuated with engaging and plot-driven dialogues. (Reviewed combined with The Creators)  5 Stars
Readers Favorite 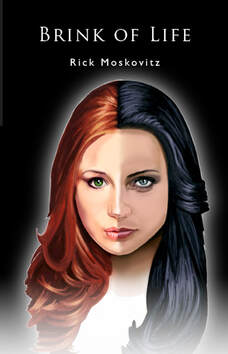